The Baron lobbed the first grenade with this gem of his self portrait: 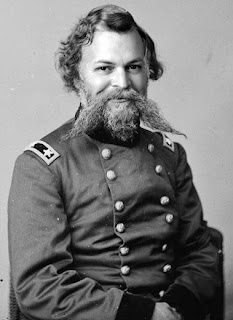 I followed with this self portrait: 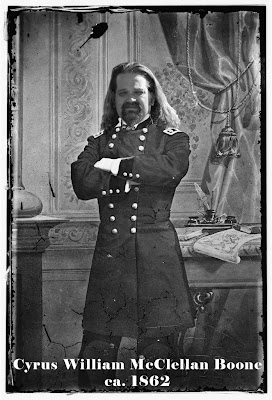 And being the master at all things photoshop, he followed up with these two: 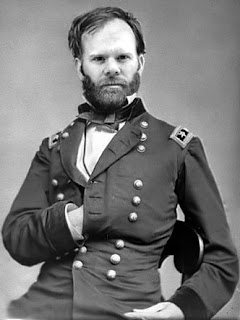 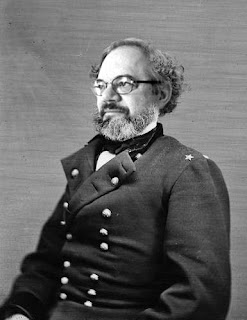 It's been much fun and nice to see the BG's as ACW Generals. Almost as good as the Hollywood Stars as Russian Generals from a while back.

Been a bit of a Whirlwind

Well, its been a bit of a whirlwind around these parts.

We are in full practice and scrimmage mode for football season for my 5th grader and 8th grader. But we had a setback with the 5th grader. He fractured his collarbone at a football tournament and is out 3-4 weeks. I don't see how he will be back in 3-4 weeks, but that's what the doctor told us. We'll see. In the mean time. I am still assistant coach on a team where my son isn't playing right now. Frustrating that. The 8th grader is fighting to make the A Team squad as Tight End. He has size and some speed. We'll see. I am hopeful.

As is usual, the beginning of the school year is absolute chaos. And many other distractions abound. Not much time left for gaming or painting. I probably won't be gaming with the BG's til November, and I don't know how much time I'll get to spend at the Recruits Gaming Convention because of football games. So each moment is precious on the gaming front right now.

I did get the following accomplished:

Once finished with the Spanish, I am not sure where I will head next.

I could delve into 15mm Sci Fi. Hordes to be painted there.
I could start on the 15mm Undead Army for Hail Caesar Fantasy.
I could nick off a dozen Foundry Pirates.
I could do a couple dozen skirmish napoleonic figs.
Or I could start the French 28mm Nappy Cavalry. Chasseurs first, Then Dragoons.

I do not have clarity at the moment. I have a wealth of choices. But no decisions.

And it sure would be nice to finish Fistful of Lead:Warriors of the Wasteland.

Well gentle readers I continued to make progress on finishing out my current Spanish and British armies for the Penninsula.

I finished 3 new stands of British Foot Artillery, plus a Division and Army Commander as well.

In addition, I got boots, pants, belts, sheaths, and jackets finished on a unit of Spanish Musketeers as well as my missing grenadier stand. Hopefully can finish them tonite.

I stole some time last night and finished up the 42nd Royal Highland Regiment - The Black Watch for my British Napoleonic Army. First time paint kilts and ticking/dicing on a highland uniform for me. I know how I would improve it, but am satisfied at table length that they look good and represent well. Here you go. 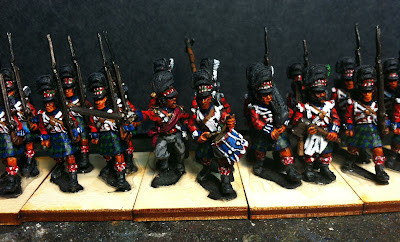 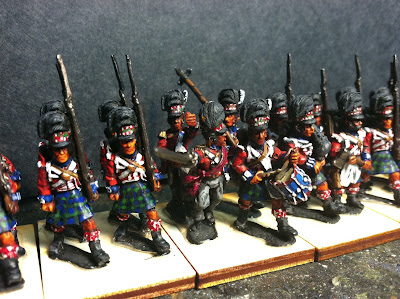 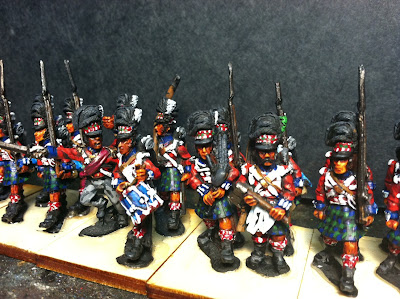 I would like to do another highlight on the flesh, but they are done for now. I may come back to that later. As soon as I finished these I base painted 3 foot artillery pieces. So I hope to have those finished this weekend.

Been out of town on vacation. I did finally get some time on my Highlanders. Dicing and ticking and kilts are done. I have to do some gold lace on the officers and finish the drummer and I am done! Pics tomorrow. I am finishing this tonite. That puts me at 11 infantry units. 1 more and I am done with the Brits. 3 cannon and the arty is totally complete as well. And I should finish these cav units...

But, I am moving on to 15mm Sci Fi. I am greatly inspired by the efforts the Propaganda Architect has put into his Modern African Wars figs for Gruntz so its time to get rolling on some more sci fi figs for Gruntz.

This is of course if I don't get my Gamer ADD under control. If I do, then I will finish that last unit of infantry and those cannons!
Posted by Lead Addict at 9:19 AM No comments: 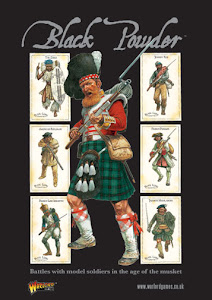